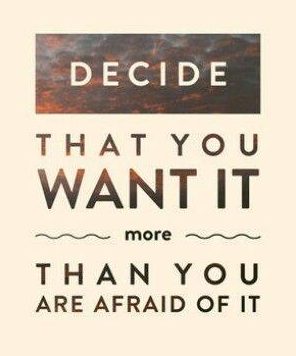 That’s what I had to ask myself.  I am extremely comfortable doing what I already know how to do.  It is doing what I’ve never done before that can shatters my nerves.

There is nothing like starting a new business to bring out the loose ends of all of your insecurities.  Mine have started looking like a 1970’s shag rug. I had a yellow and orange one I took from my parents’ house to college with me, so I know of what I speak!

The fear of failure always looms over those of us who have been judged by our performance, and especially for those from whom much has been expected.  If you have good natural skills and talents, you can fake it for a while, and probably even succeed.  However, internally, you are a mess, waiting for the next mistake to crop up and blow all of your hard work out of the water, exposing you for the incompetent fraud you are secretly afraid you may be.

Then there is the fear of failure because we have never succeeded to our own standards.  We expect things to come together quickly, be an overnight success, have everything go our way because we worked hard.  However, that’s not how the world works. Just because we work hard for something we really want doesn’t mean it will happen.  Even if I wanted to be President of the United States, that doesn’t mean it would happen.

On the flip side, even if we are apparently unsuccessful doing the right thing at the right time and place, we are still pleasing to God.  Why?  Because obedience is better than sacrifice. He doesn’t want our offerings that we gathered or created in our own strength and wisdom.  He only wants us to be willing to surrender wholly to His Kingdom plan, even when we don’t know what it is, where it will take us, or what the outcome will be.

And you can be sure that being obedient to His Kingdom plan will make you uber uncomfortable.  He will not keep you in the same place forever. He will push you into areas where you will need to reach out to Him for wisdom, courage, strength and direction.

A healthy Christian is constantly being pushed out of the nest they have built for themselves along their journey with God.  He is using those challenges and struggles to chisel off those things that are unlike Christ and which get between unconditional love for and surrender to Him.  If you haven’t done something new or uncomfortable, you need to be worried.  You can’t grow by staying in the same place doing the same things.

I hate the thought that I may be acting pushy.  So telling people about what I offer, even if I know it is the answer to their problem, and I have made it affordable enough for anyone to access (you can’t get better than free), is extremely hard.  My insecurities say to me, “No one is going to want to work with you.  You are going to look like a fool – a pushy fool.”

So I spit in fear’s face and said, “I’m going to do it anyway!”  I created a video that was completely me, held my breath, and posted it on my Facebook pages.  And guess what?  I didn’t die.  I realized that was a limitation I was placing on myself, and I could remove that limitation if I wanted to do so.  So I did.  And I had several women show interest in working with me.

The bottom line was that I finally determined that everything I had to gain from facing my fears was worth the leap into the unknown.  So I want you to ask yourself what you are missing by giving in to your fears?  Write or draw it out.  Make it real to yourself. Make yourself salivate over having it.  Make yourself miserable about not having it – so miserable that you will finally push past your fears and go for it.

If God is calling you somewhere to do something and you obey, He will consider you a success no matter what the apparent outcome is.  Being in the center of God’s will is the most important thing in your life.  It is where you will always find the peace in the middle of the storm, and supernatural power that will flow through you to accomplish whatever He asks of you.  What is He asking of you?  Push through your fears and DO IT!